With a huge collection of games, brilliant gamification strategies, and interesting marketing campaigns and bonuses, the question should perhaps be why aren’t you already wagering on Casumo Casino!
Play Now

Casumo Casino is an innovative online casino which is largely unrivaled in what remains a somewhat monotonous market space. With a vast collection of games, brilliant gamification strategies, and interesting marketing campaigns, the question should perhaps be why aren’t you already wagering on Casumo when it’s seemingly so much more happening than the most other sites out there. It’s simply too quirky and fun to dislike.
Founded in 2012, Casumo is one of the most popular gaming sites in other countries for its innovative approach. Now they have entered the New Zealand market, in May 2019. Obviously, they’ve been pretty successful in the last seven years or they would have shut shop long ago, and there’s no reason to worry too much about legitimacy at this point either. With a low volume of customer complaints and a generally positive reputation, this is probably a good choice if you’re new to the world of online casinos. Casumo has its registered office in Malta and is licensed by both the Malta Gaming Authority and the UK Gambling Commission. The site’s operator is apparently Scandinavian in origin, but then Casumo has made pretty big inroads in the Europe online gambling scene as well.
Casumo has tried to set themselves apart from other online casinos, which is, of course, a welcome thing in a relatively monotonous space. Of course, different isn’t always better and so you might be wondering if it makes Casumo any more interesting. In this case, it seems that it was very much worthwhile for the team behind the site to put in a bit more effort and think outside the box – there are a lot of nice additions here and on top of it the support team is pretty great too. Overall, we think that Casumo is one example of what online casinos can and should be rather than yet another emulation of the same thing. 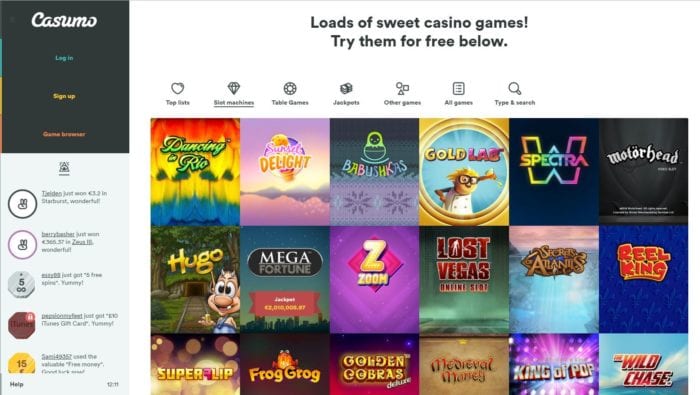 Casumo casino is largely similar to other casino sites in terms of design, and it’s nice enough to look at without being particularly revolutionary in this regard. Yes, it’s a little different from the others, but it still has a navigation bar on the left with their logo atop it, more links within the site at the bottom, and of course, their licensing information can be found below all of that. That said, there’s a lot of white space here on larger screens – it seems to be designed for tablets and would work well for anyone who’s more likely to play slots on their iPad than on a desktop computer.

There are lots of nice animations, and these are really what sets Casumo apart from so many other online casinos which are content with looking more or less exactly alike and offering virtually nothing new. The Casumo mascot is himself present as an animated character, which can be a fun little addition for some people. If you’re interested in gambling online but want something quirky and fun rather than the usual experience, you’ll probably like Casumo. If you have a sluggish internet connection, you might get annoyed with longer loading times. Or you might just find the idea of animations annoying in general and end up hating this one. Overall, we think it’s a pretty well-designed site with a lot of playful touches that really set it apart from most of the others out there.

Casumo’s bonuses are kind of innovative in a world where most sites will give you a matched bonus on your deposit, a bunch of free spins, and then call it a day while making it a headache for players to cash out. Yes, you get up to five deposit bonuses worth up to NZ$1200 in total, 200 free spins, and the like as a welcome pack. That’s a pretty good deal but not much different from other online casinos and there’s the additional catch that the otherwise decent welcome bonus is restricted to slots. Also note that there’s a 25x wagering requirement for the deposit bonuses and a 30x wagering requirement for your free spins – if you try and cash out before this, you’ll lose your bonus.
Aside from the welcome bonus, there are a few other deals here that you can definitely come to appreciate. One of these is their Reel Races tournaments, where you have a chance to win $1000 in cash or any one of hundreds of other prizes on a daily basis. These Reel Races come up every 30 minutes on a 24/7 basis, but the €1000 cash prize comes only once daily at 20:00 CET. Basically, you get a certain allotment of Reel Race spins, so that you can attempt as many wins, big wins, mega wins, and wins in a row as possible before your time runs out.

While we’re talking about the extras here, it’s also pretty important to mention Casumo’s unique customer rewards program. Rather than just showering loyal customers with rewards like anywhere else, Casumo’s program is itself an adventure game in which players collect points to reach higher levels and new “planets” to reap even more rewards. Your rewards and trophies can be gathered throughout the adventure and your odds of winning more valuable prizes also increase as you play more. Points can be seen in your account, illustrated through a progress bar which indicates how far to the next level you are. These rewards vary, but you can expect to see things like free spins, bonuses, and even free credits to use while playing. And of course with them more time and money that you put into games on Casumo, you can expect more and more rewards to come of it.

In this day and age, it’s pretty vital for online casinos to have a functional mobile website if not a dedicated app, because it’s really convenient to be able to play slots anywhere and any time you darn well please. We’re happy to say that the Casumo site works perfectly fine on mobile devices, and moreover it’s kind of designed with them in mind over desktop computers. This is fine if you’re a normal person who likes to play games on your mobile or a tablet or even a netbook, but if you’re that nutcase who likes setting up a projector in order to play Mega Moolah on a big screen then you might want to consider this one’s web design first. 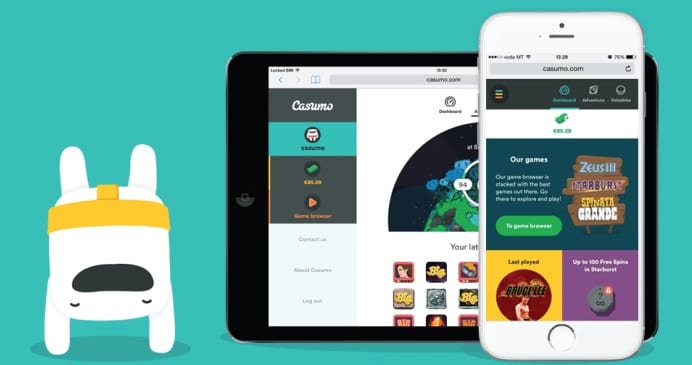 Casumo has a great selection of video slots, in fact it’s probably one of the better collections on the internet and there are games from a number of different providers. Just as one would expect there are a lot of slots here from Microgaming and NetEnt, which should be more than enough to keep you happy if your main thing is slots. There are otherwise casino games from the same providers as well as Thunderkick, GreenTube, and Evolution gaming – including favourites like different variants of blackjack and all of the main styles of roulette. You also get a few lesser known games like red dog.
What do you not get here then? Bingo, apparently. No craps, either. Otherwise you shouldn’t be disappointed too much, unless you prefer to dabble in financials or would rather bet on sports than on video slots.
Since Casumo has such a broad range of games, it was vital for them to come up with suitable table limits for all players – which they’ve actually done quite beautifully if we may say. This allows for new and low stakes players needs to be met whilst still giving those in it to win big a chance to do so. This is as true for roulette games as it is for slots, so everyone can play without going out of their comfort zone.

The live casino at Casumo is pretty decent, and you get a few different flavours of blackjack and of roulette, as well as keno. We don’t have a whole lot to say on this otherwise because while it’s great that they include a live casino, you don’t get so much variety for that on Casumo as you do with their other games. 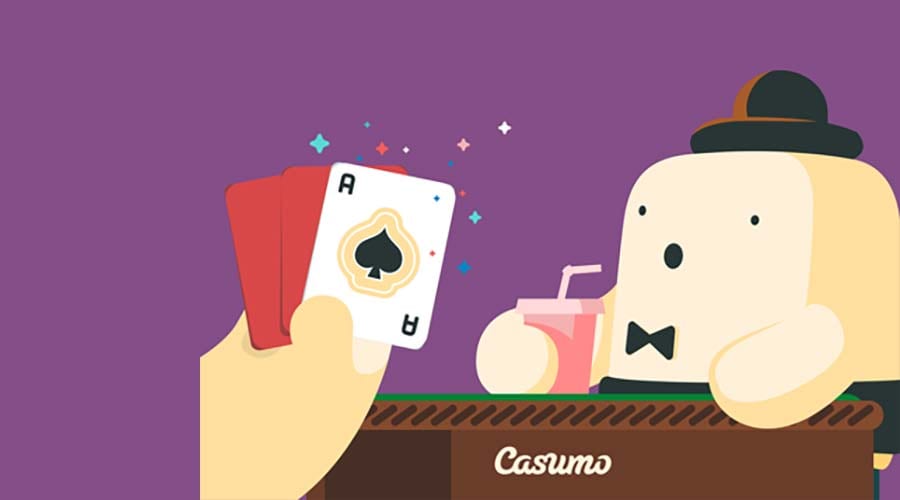 You can deposit and withdraw on Casumo using a bank wire transfer, Neteller, PaySafeCard, Skrill, your Visa or MasterCard, iDEAL, Pugglepay, and more. There are no hangups in terms of withdrawals as evidenced by the low volume of such complaints, and it looks to be that Casumo does a pretty good job of processing all of these within a 24 hour timeframe.

With 128-bit SSL encryption, you can rest assured that Casumo takes security even more seriously than others in the industry. Since Casumo is registered and licensed with the UKGC, you will also see the relevant license information so that you can rest assured. As a result of this licensing, you’ll also find a responsible gaming section on the site, pursuant to the UKGC’s policies.

Customer support can easily make or break an online casino, and so it’s really vital to talk to people who are actually interested in dealing with your customer complaints rather than simply ignoring you or offering some nonsensical excuses and explanations that clarify nothing. We’re glad that this isn’t the case here: Casumo has a high rate of customer satisfaction for good reason, and they’re very much on top of their customer service game.
The main options for reaching Casumo’s support team are through their 24/7 live chat, or via email. These offer prompt and polite responses without any complications, although it might be a good idea to save everyone’s time and ensure that the answer to your question isn’t already on the extensive FAQ page. And while Casumo doesn’t have phones support (who needs that anymore anyway?), they do list their mailing address and so if you’d really like a more formal response then you can always write them a letter. While the response on the live chat is pretty fast and their email queries are answered in less than ten minutes (averaging 3-6 minutes), we can’t give a similarly speedy timeframe for letters.