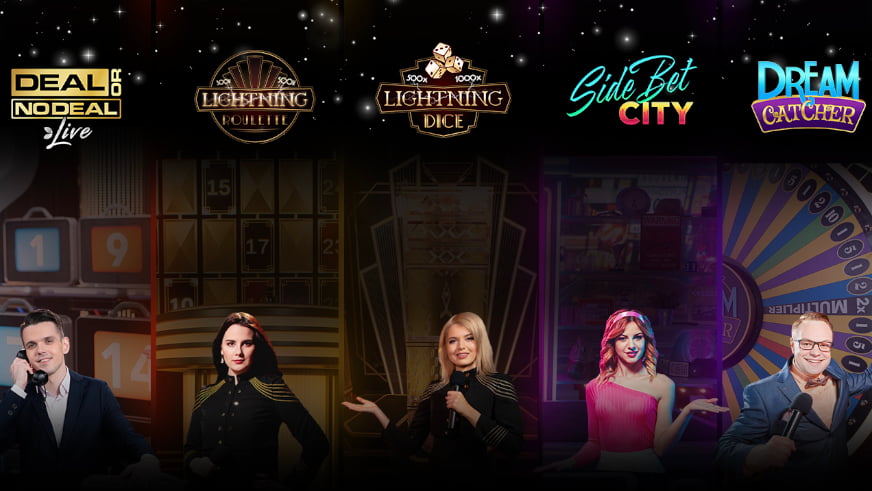 Evolution brought to people innovative and modern ways of playing traditional games. People got the opportunity to experience their favorite games in a new way through the live show. Despite that, they have different chances to earn a lot of money. More precisely, through the game, they will get different promotions such as free spins bonus, free slots, deposit bonuses, etc. that can boost their game-level.

People were attracted by this Evolution live show game trend because playing games on a live show boosts the excitement and brings a unique and unforgettable experience for them.

In this article, we prepared a list of some of the most popular live game show from Evolution that players considered as the most thrilling ones.

The Gonzo live show is inspired by the NetEnt casino software provider’s slot game. More precisely, NetEnt created a popular game called Gonzo’s Quest. This live game show is the first online casinos slot game in the world that can be played in the mode of virtual reality.

The show functionates on the treasure searching principle. In other words, you need to go with gonzo on a journey to find the hidden treasure in the ancient Incan world. Treasure is hidden on a wall that is created from 70 stones. What makes this live show so unique and intriguing is the fact that every player has a different adventure. So, the outcome of your game will result from how many Picks you buy, which stone you choose to select and examine, etc.

The thing that makes the game even more interesting is The Prize Drop part that can increase your winning by 20 000x for each stone. Additionally, there are others promotions, bonuses, re-drops, and multipliers that will keep you thrilled through the entire game and motivate you to get big winnings.

Many people consider “Crazy Time” as the most entertaining casino game ever created. When you are playing this game, you have the opportunity to win different multipliers, bonuses, and promotional surprises that will boost your energy and adrenaline! This game is both fun to watch and play.

Crazy Time is a live game show located in a large and light studio that provides many different interesting stuff for the players such as money wheel, top slot, and four bonuses that they can earn through the game. This game is a combination of action and adventure at the same time. The best of all is that this game is not so complex for playing, so everyone can participate in it and handle the rules easily. Players need to place their bets on some number or bonus. The chooses of numbers are 1, 2, 5, and 10. When it comes to the bonuses, players can expect to see that it is up to them to make some decision when they get them. Logically, based on the decision they make, they will earn different prizes.

The monopoly game is definitely one of the most popular games for decades. People have enjoyed playing this game since always! Therefore, when they noticed that it is created Monopoly live show game, people were very excited to participate in it. This online variant attracted many people and quickly became one of the top live shows that people watch. In this live monopoly variant of the dream catcher money wheel, the task of the players is to bet on some number they think the wheel will stop at.

This money wheel provides the player numerous chances for winning money. For instance, there are special CHANCE and 2ROLLS sections that offer to the player three possibilities – instant cash, multipliers, or entering into a 3D bonus game. In the case where the bonus game is activated, the player is joining with Mr. Monopoly and steps into a special 3D monopoly world. In there, the player has a unique opportunity to experience a new level of the game, where he is playing monopoly on the board and collect different things based on the field he steps.

One more live show that attracted many people who like roulette games is – Lightning Roulette. Live casino becomes so popular with this revolutionary version of the roulette game. What makes this game so exciting and thrilling is the experience it provides to the players. This innovative and original game show has become the biggest live roulette table in the world.

There are so many chances for players to get some awards for winnings including special chances. Such as RNG Lucky Numbers and Lucky Payouts that give extra money. In every round of this game show, lucky numbers are held by lightning between one and five. And there, you have the opportunity to earn 50x and 500x on a bet called Straight Up.

Mega Ball game show is available from Evolution and it is located in a very colorful studio. The main attraction in the studio is that special custom-built ball drawing machine that includes additional 51 multi-colored numbered balls. This game would not be so popular that it does not give the opportunity to the players to multiply their winnings. The mega Ball game is very easy to play, so no matter how old you are, you will understand the rules.

The task of the players is to set the value of their cards and then purchase some number they want. They can buy even 200 for one game. After that, players are waiting to see that balls are drawn match with those on their cards. When they make lines, the player will win the money!

The live game show called Dream Catcher is a very entertaining game that includes a live money wheel that operates by a game presenter. This game attracts most of those who enjoy slots games. Playing this game does not require much. In other words, the player just needs to understand some simple rules. Interestingly, the rules of this game are even easier than they would be in any other casino game.

The game presenter needs to spin the wheel and through it interact with players. The task of the player is to bet on some number where they think that wheel will stop. In fact, there are a couple of options, and those are numbers 1, 2, 5, 10, 20, or 40. In case the player bets on the number where the wheel stopped he will win the analogous payout.