Online slot lovers got another hit release from Pragmatic Play as the Hand of Midas slot arrives! Players will be looking to gain the golden touch and claim the rewards waiting on the reels. 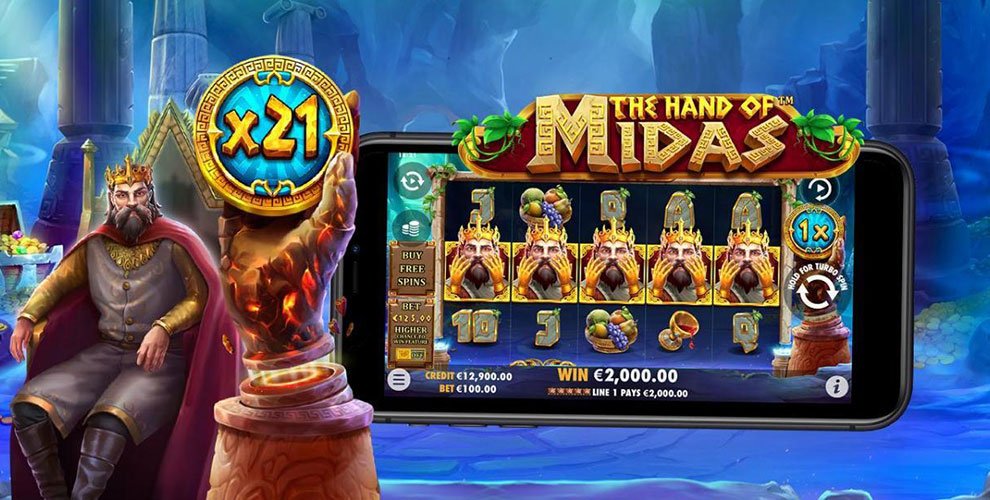 Mythology-based slots never get old, making the Hand of Midas slot a true discovery. The game quickly arrives to free spins casinos and players will even have the chance to buy the bonus! Join us on the road to uncover the slot details as numerous surprises are waiting hidden in this slot.

Main gameplay elements of the Hand of Midas slot

Having in mind that the Hand of Midas slot is designed by Pragmatic Play, several features are there. Players can greatly benefit from creative in-game aspects added by the provider. Either way, let’s start with the game layout.

The Hand of Midas slot starts with a 5×3 grid that comes with 20 pay lines. It comes with fitting aspects of a modern Pragmatic Play release. The graphics are superb, animations are great and there’s a fitting soundtrack.

The whole layout is designed in a mythical theme, while picture symbols are premiums. There’re some low-paying symbols as well. When it comes to the most valuable game symbol, it’s King Midas himself.

On the other hand, the wild symbols also pay out greatly as it lands on the middle 3 reels. However, the wilds serve a dual role since they also bring out a multiplier when landed.

Players can combine the wins with multipliers that are displayed in the lower right corner of the grid.

The Hand of Midas slot is also filled with one-of-a-kind features designed by Pragmatic Play. Among such features is the possibility to buy the free spins depending on the jurisdiction.

Once players enter the free spins bonus, amazing winning possibilities are present. Pragmatic Play made sure to include the exciting bonus game elements.

Namely, once players trigger the bonus via scatters, mini-slots are put in play. Each mini slot awards a random spin number, making the bonus round start at the end. Once all the spin numbers are added, players will be awarded the total spin number.

Moreover, the sticky wilds are present during the bonus game to increase the possibilities. The sticky wilds can only land on the middle reels, so players will have to land premiums on 1st reel.

Great wins are possible this way, while the bonus round multiplier is also present. Only this time, unlike in the base game, the value isn’t reset for the upcoming spin.

The Hand of Midas slot is among the best new slots developed by Pragmatic Play recently. Players can have a delightful playing experience by trying out the game on casino sites.