Roulette Variations That Are Really Underrated

In the casino rooms all over the world, the roulette as a game is very popular.

Whether you’re a newbie or have been in the casino industry for quite some time, you must’ve heard of it.

Easy, fun, and really rich if you’re lucky enough, this wheel game can offer more than it looks like.

But, all over the world, everyone is familiar with different variations and kinds of this game.

The rules are really simple and pretty much the same everywhere.

But, there are all kinds of twists that make different kinds of roulette unique.

So, what are some of these roulette variations?

Many people think that the french roulette is 100% the same as the European version, but actually, it’s not.

Even though they may seem like identical versions, there are a couple of rules that make them what they are.

The french roulette has a table that isn’t the same as the classic version; the number grid is placed horizontally.

Also, the house edge on this variation is 1.35% on even money bets.

But, the thing that this version has in common with the European version is that the wheel has only one 0.

Unlike the American type, that has that number doubled.

As the name itself pretty much clears it all up, the hybrid wheels are the real mix-up.

But, how does this happen actually?

Because there are many versions of roulette all over the world, they can be combined and work like that just fine.

For example, you can have the American roulette table but with french or European standards.

There is a lot of freedom when it comes to this one, and it can offer a lot of excitement and fun in the process. 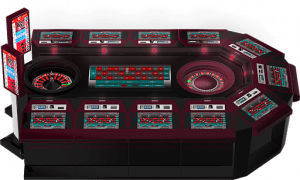 Have you ever thought that maybe one ball just isn’t enough when it comes to roulette?

Well, today is your lucky day because a double ball roulette version exists.

And it’s better than you can imagine.

The reason why people love this version a lot is because, with two balls, the rules are the same.

But, what’s different is the possibilities of what you can actually win with two balls.

The chances for money are greater, and the fun is emphasized.

What else do you need anyway?

To some people, this may come off as distracting and even confusing.

But, it actually is pretty simple to handle.

The multiwheel roulette version can go up to 8 wheels in one round.

There’s no doubt in that.

And you can enable and disable the wheels at your will; that’s where the exciting part really is.

So, when this happens, imagine the possibilities that you can win based on your winnings and spinning. Infinite!

Whatever you choose out of this, you definitely won’t go wrong.

But, at the end of the day, everyone has their preferences.

For some people, among these roulette variations, the traditional wheel type works the best for them.

The casino world is made for fun, relaxation, and experimenting.

And that’s why trying something new from time to time definitely won’t do any harm.

Who knows, you may like these, maybe you won’t.

The only way to find out is to try them!